On Thursday 2 February the first edition of People and Places was an extremely interesting and informative talk from Christine Norman about her travels in Scandinavia. With her we visited Denmark, Sweden, Finland and “the Land of the Midnight Sun”, Norway. 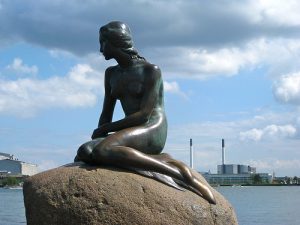 The Little Mermaid, Copenhagen
We started in Copenhagen with the Little Mermaid, which everyone visiting there views.  We moved to the Amalienborg Palace where the Changing of the Guard takes place every two hours.  We also saw the winding outside staircase of the spire of the Baroque church of Our Saviour.
Next was Sweden and Stockholm. There we saw the City Hall with its Gold Room, whose walls are covered in mosaics.
Then came Helsinki in Finland, where we saw the Church of the Rock. The interior was excavated and built directly out of solid rock and is bathed in natural light which enters through the skylight surrounding the center copper dome.   Christine’s photo showed very few people in the church, but I have visited this church when it was most impossible to move for tourists!  We also learned that the Laps who live in the northern part of Finland are properly referred to as Samis.
At Rovaniemi  we saw a photo of Christine meeting the real Santa’s Claus! His  “Elves” were writing Christmas cards to be sent from tourists to all parts of the world.
Finally Norway, the “Land of the Midnight Sun” and up to Nordkapp Island.   On the final leg of her journey we came south down Norway’s Fjords, seeing (but fortunately not literally experiencing) the extreme zig-zag roads such as the Trolls Road, and the beautiful scenery such as the Seven Sisters in Geirangerfjord. 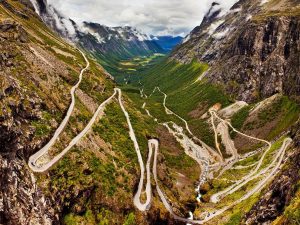 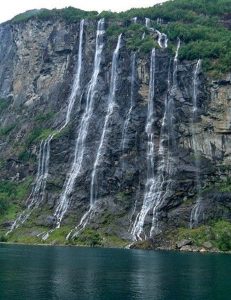 A great talk, making us quite envious of the trip. 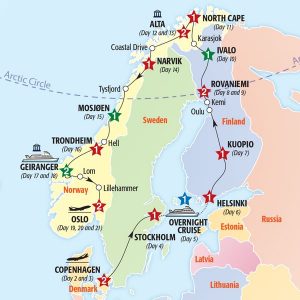