Humphrey Williams talked about federal government in Australia and the “engine” driving it.

He described the main components, Legislature, Executive and Judiciary, their constitutional foundation and some of the major strengths and weakness in that foundation.

Humphrey said: “One such weakness has been the unexpected growth in Commonwealth powers”.    Foremost among these is the power of taxation which was originally intended to be – and was until 1942 –  shared concurrently between the Commonwealth and the States.

However High Court interpretations of the Constitution have effectively made income taxation the exclusive province of the federal government. This has had a devastating impact on the level of State fiscal autonomy.  In the words of one learned commentator:

“None of the Constitution’s framers would ever have imagined, back in the 1890’s or in 1901, that a century or so later the Australian States would be as emasculated as they are today …  (or become) the … enfeebled … creatures they have become.”

Relevant to this is our hybrid Westminster/American form of government.  That, and some “disambiguation” of political jargon, was also discussed.

An excellent Presentation on a subject that was enjoyed by all those present. The questions that followed Humphrey’s presentation reflected the level interest in this subject. 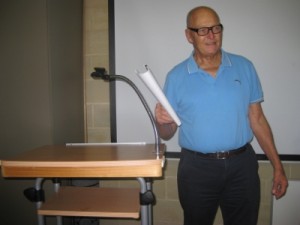