Presented by Sheila Twine at Bunbury U3A
Review written by: Sheila Twine
45  U3A members and guests assembled at the Edith Cowan University in Bunbury to hear Sheila Twine talking about three of Jordan’s Ancient Cities.
She spoke about the capital Amman which was a small town around 4,000 BC.  and is now a modern city, bursting at the seams with a huge intake of Syrian refugees.  She then showed photos of Jerash, which had a Greek influence followed by Roman elements.   It is now a major tourist destination with its amphitheatres, agoras, gymnasium,  hippodrome and colonnaded streets..
Finally she entranced the crowd with arresting photos of PETRA, ‘the Rose-red City, half as old as time’.      Six millennia ago,  Nabatean Petra was the major trade route in the Middle East and so was wealthy and had a hugely prosperous population. 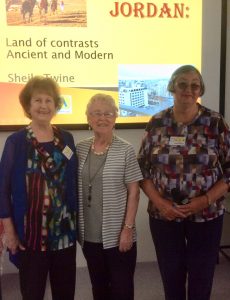