We heard about the various forms of symbiosis – this is any type of a close and long-term biological interaction between two different biological organisms. The types of symbiosis are commensalism, mutualism and parasitism.

Commensalism is a class of relationships between two organisms where one organism obtains food or other benefits from the other without affecting it. An example of this is a plant that attaches itself to a tree in a forest, partway up the trunk, in order to obtain more light, sun or rain than it would receive if it lived on the forest floor.   The attaching plant benefits, and the tree doesn’t suffer but neither does it gain anything. This type of plant is not a parasite.

Mutualism is the way two organisms of different species exist in a relationship in which each individual benefits from the activity of the other. Examples of this that we heard about are termites and mistletoe and the mistletoe bird. Pollination is also an classic example of mutualism. A bird or insect will pollinate a plant while at the same time taking nectar or other nutrient from the plant.

Although the mistletoe plant would be considered a parasite, we heard about a good example of mutualism with mistletoe and the mistletoe bird in Australia. 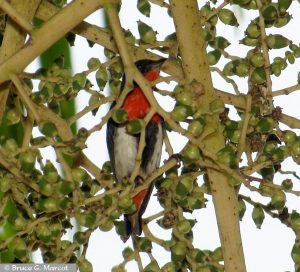 A mistletoe bird and mistletoe

Another example of mutualism that we heard about was the relationship between a clownfish and a sea anemone, where the fish drive off butterfly fish that would harm the anemone, and in turn the fish lives among the anemones’ tentacles which thus protect the fish from predators.

Finally, in mutualism, we heard about the remora fish. This fish will attach itself to a larger animal such as a shark, and travel everywhere the shark goes, thus ‘hitching’ a ride. In return the remora will eat any parasites on the shark, helping to keep the latter clean. It will also eat any left-over food the shark doesn’t swallow. So the remora eats and the shark stays clean and healthy.

The last section dealt with parasitism – where one organism, the parasite, lives on or in another organism, the host, causing it some harm, and is adapted structurally to this way of life.   We heard about Roy’s personal experience of teaching in a school where children in nearly all the classes had head lice! We also heard in graphic detail, probably more than we wanted, about the life cycle of the tape worm. That was probably enough to make one a vegetarian! Then we heard about the process by which the mosquito transmits malaria and such like diseases. The host in these cases being the human being, who gains nothing from the parasite. 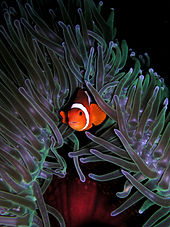 A clownfish in a sea-anemone