On Tuesday, 29th May, a “fifth” Tuesday, U3A hosted a Q & A session, based on the popular ABC Q & A Program.   The theme was “Mandurah Issues” and Bob Simpkins acted as question master, presenting the questions previously submitted by audience members. 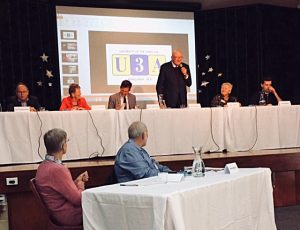 John Thornton was the Chairman, and facilitator, and the panel comprised local politicians and dignitaries with knowledge of, and interests in, Mandurah. They were: David Templeman, MLA, State member for Mandurah; Zak Kirkup, MLA, State member for Dawesville; June Van de Klashorst, previously a State MP and minister, and now resident in Mandurah; Rhys Williams, Mayor of Mandurah; Paddi Creevey, ex-Mayor of Mandurah and Chair of the Peel Development Commission.

The questions covered some serious issues and all the right people were on the panel to discuss them. As was to be expected, there were too many topics to be covered in the time available, and John Thornton did a great job in selecting the most important.

As might be expected, local topics of concern ranged from The Peel Health Campus; the parking difficulties at the Mandurah train station, and also at MPAC; the mythical station at Paganoni Road, through to a very topical subject throughout the country, the live sheep export trade.   The footbridge across Mandurah Road from the train station, dubbed “the bridge to nowhere” raised a laugh but the explanation for its existence was accepted.

Altogether it was a very good afternoon, and one that should perhaps be repeated in the future.