Edvard Grieg was born in Bergen, Norway in 1843. He became a pianist and composer and was considered one of the leading Romantic composers of that era. He used Norwegian folk music and the sounds of the Norwegian environment for inspiration. He became one of the most celebrated people from Bergen and there are numerous statues of him in Norway today.

When he was 15 years old he was sent to the Leipzig Music Conservatory. He is said to have disliked the strict discipline but excelled at the piano and organ. During that time he survived life-threatening tuberculosis.

At the age of 18 he performed his first concert in Karlshamn, Sweden. He later went to Copenhagen, Denmark where he stayed for three years. Around that time he met Rikard Nordraak, composer of the Norwegian national anthem, who became a good friend and a source of inspiration. Nordraak died in 1866 and Grieg composed a funeral march in his honour.

In 1866, Grieg married Nina Hagerup, his cousin, who was a lyric soprano. The following year their only child, Alexandra, was born, however, she died as a young child. In 1868, he composed his Piano Concerto in A Minor which Christine played as a video. Later the same year he met Franz Liszt and they shared and enjoyed each other’s music.

In 1874 to 1876 Grieg composed the music for Peer Gynt which is still so popular today. He later met Tchaikovsky and was highly impressed with his greatness. Tchaikovsky thought highly of Grieg’s music. In subsequent years he was awarded two honorary doctorates; University of Cambridge in 1894 and Oxford University in 1906. That same year he met Percy Grainger the Australian composer and pianist. Grieg was highly impressed with Grainger’s ability to play his music, ‘as it ought to be played’. Grieg died in 1907 from heart failure. His funeral drew 30 to 40 thousand mourners.

Grieg defined Norwegian music and his music has been treasured by a worldwide audience ever since. 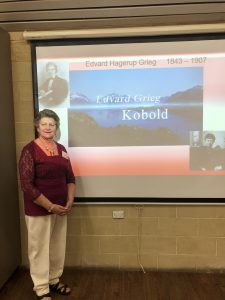