On Tuesday 24 April 2018 at the General Meeting, we heard another excellent talk by Adrian Lambourne, about The Dambusters, the attempt to destroy the dams on the River Ruhr in west Germany in WW II, using the “bouncing bomb” invented by Dr. Barnes Wallis. 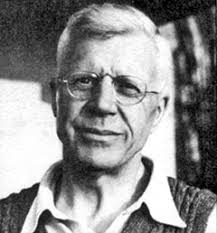 The talk started with, of course, a short rendition of The Dambusters march.
We then saw several video clips describing the development and testing of the bomb, and also pictures of the dams before the bombing and now, having been rebuilt.

The Dambusters raid was scheduled for May 1943. But before that the bomb had to be developed and tested, the Lancaster bombers that were to carry the bombs had to be modified, and the political infighting against the bomb being developed at all had to be overcome.

In May 1942 the theory of the bouncing bomb was tested on a scale model of a dam, and in July 1942 a full-sized test was carried out in Wales.

But despite the success of the tests and thus the idea that the bomb would be successful, the hierarchy of the RAF did not want it. In February 1943 Air Marshal Sir John Linnell, who was Controller of Research and Development of the Ministry of Aircraft Production was plotting to end the project. Sir Arthur Harris (bomber Harris) C in C Bomber Command wrote to Sir Charles Portal, Chief of the Air Staff, arguing against the bomb.

But this was all in vain, and the project was given the go-ahead in late February 1943, to take place on the night of 16-17 May 1943, by 617 Squadron of the RAF, a new squadron based at Scampton, and led by Guy Gibson, who was in fact only 24 years old at the time. The dams to be attacked were the Möhne, the Eder and the Sorpe Dams. 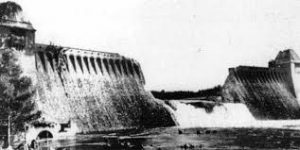 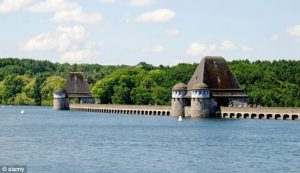 The Möhne Dam breached, and today

This meant that there was only eight weeks to build the bombs and modify the Lancaster bombers to carry them.

19 Lancaster bombers took part in the raid, but only 11 returned. 53 crew were killed and three taken POW.

One thing that has never been explained, is that when, after the breaching of the dam wall of the Möhne Dam, it was rebuilt using wooden scaffolding, the British did not attempt to destroy this scaffolding and thus flood the Ruhr again. Indeed Albert Speer (German armaments minister) made this point in a letter to Hitler.

Another excellent talk enjoyed by all and we look forward to another one. 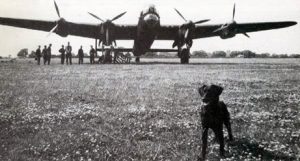 A Lancaster bomber used in the Dambusters Raid, with Guy Gibson’s dog