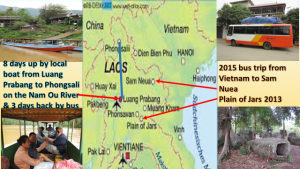 Bob and Carol Simpkins spoke on Independent travel in South East Asia. Carol spoke on the ease of using public transport to get around, both internally and between countries. She also spoke of the advantages of using smaller family run hotels. Their love of the Mekong River featured heavily in her report, which also mentioned the sand mining and dam building taking place on the river currently, and the damage it is doing.

They were very lucky to be amongst the last people able to travel up the whole length of the Nam Ou River in Laos, taking 8 days to do so using local ferries. The Nam Ou being a major tributary into the Mekong. The Chinese Government have leased the river for 20 years with a further 20 year option and are building seven hydroelectricity dams on it, which will supply power back into China.

Bob Spoke of their three visits into Laos and how they slowly learnt of the “Secret War” conducted by the CIA and the US government between 1964 and 1973. How the US dropped more bombs on neutral Laos than were dropped on Germany and Japan combined in the Second World War. Bob also spoke of the 80 million unexploded ordinances that litter Laos with deadly consequences for anyone who picks up a UXO.