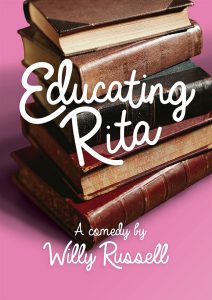 A disappointingly small number of members attended Adventures in Literature on Thursday 27 April, to take part in a play reading of the excellent play Educating Rita, by Willy Russell.

Rita is determined to continue her education before having any children and enrols in the Open University to be tutored by Frank, who admits he is an “appalling” teacher, and only undertook to teach Rita because he needed the money.

Rita writes her essays at work, she is a hairdresser, and some weeks she is able to write a lot, other weeks very little;  she cannot study at home as her husband Denny thinks this education business is silly, that she should be having children.  When he discovers that despite what she told him she is in fact still “on the pill”, he burns all her books (including some belonging to Frank) and her papers.

Rita tells Frank she wants to be able to make better choices in her life and that Denny’s idea of choice, is to be able to choose between 8 different kinds of lager! Rita wants more than that.

Frank tells Rita she is a “breath of fresh air” but she says she isn’t, prompting Frank to tell her she doesn’t understand a compliment.  He invites her to come to his house to a dinner party, but although she goes to the house, when she gets there Rita hasn’t got the courage to go in.  She thinks she was invited so the other people would think she was invited to give them a laugh.  Frank tells her she is delightful and charming and that is why he invited her, but she doesn’t like this description.

We only had time in the session to read the first act, and hopefully we will do Act Two at a later date.  Each of us took turns at reading a page, which made it most enjoyable.  We realised that the play was not a recent one (in fact it was written in 1983) by references to Farrah Fawcett and Rita Mae Brown’s books, but this did not detract from the humour and some pathos.

Thank you to Margaret and Ida for providing the copies of the play, and hosting such an enjoyable session. 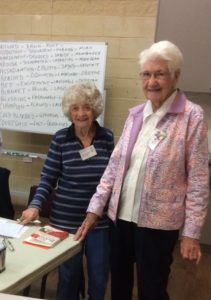