33 members and guests assembled to hear Liz Whichello give her first presentation to our Mandurah U3A. Liz kept her audience rapt in the unfolding story of Mrs. Beeton.    She took us through the life of this lady whose fame has come down through the ages and whose name has become familiar to all as the authoritative author on housekeeping. 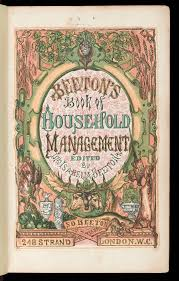 She detailed Isabella Beeton’s early family life looking after her numerous brothers and sister (likened to the Brady Bunch, except that there were over 20 children) as they inhabited the Epsom Race Course Pavilion. Liz then explained Isabella’s marriage at the age of 20 to Samuel Beeton who was a publisher of magazines and books.  Together the Beetons set about using articles and reader contributions from the ‘English Woman’s Domestic Magazine’ and other works translated from French and German to formulate new publications under the authorship of Mrs. Beeton.  Plagiarism or downright fraud?    Her Book of Household Management was published in 1857.   This and other works were immensely popular and lucrative to their business.

Sadly Isabella Beeton died aged only 28 in 1865,  but Samuel was on to a good thing and simply did not tell his readership of her demise.  He continued publication of the ‘Mrs. Beeton work’ in different forms such as weekly serials, Shilling Cookery Books, Cakes and Bakes, English Woman’s Cookery and more.  The deception was lucrative and carried on for many years.  The heavy tome of Mrs. Beeton’s Book of Household Management sold 60,000 copies at a price of 7s 6d.

Liz concluded her presentation by feeding us cake and chocolate eggs then giving us a lighthearted quiz on aspects of food.

Our U3A is indeed lucky to have a new presenter to add to our list and we all look forward to Liz presenting to us during the second semester. 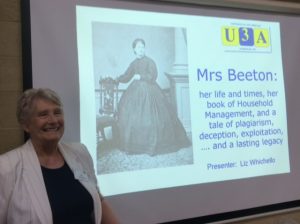