Queen Elizabeth I, her health, her doctor and her alleged virginity.

Daughter of Henry VIII and Anne Boleyn, Elizabeth I was born in 1533 and died in 1603 at a ripe age for the era. During her life she had a series of illnesses, mainly of a neurotic origin – feelings of weakness, fatigue, chronic anxiety, but also there were more definite diagnoses such as rheumatism and in 1562 smallpox. She recovered from this but lost most of her hair and thereafter wore a red wig. 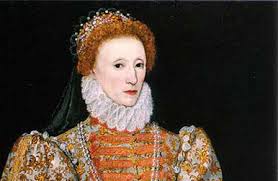 Her favourite doctor was Dr Ruy Lopez, who arrived in 1558 from his native Portugal as a refugee from the inquisition. Fine physician he may have been, but he was in the pay of Philip, King of Spain, England’s enemy. He was arrested in 1594, found guilty and after 4 months vacillation by a nervous queen was hanged drawn and quartered.

As regards the Queen’s alleged and well touted virginal status, nobody knows the answer. Ben Jonson the contemporary dramatist claimed ‘she had a membrane on her which made her incapable of man’.  She herself said ‘I hate the idea of marriage for reasons I would not divulge to a twin soul’. Despite that she was very friendly and flirtatious with the 19 year old Earl of Essex (she was the 53) and Robert Dudley.

A little known feature of her early life may have influenced her sexual health. After her mother’s execution she had an unhappy childhood in the company of various stepmothers, especially the last, Catherine Parr, who survived Henry VIII and married Thomas Seymour. It was his habit to enter Elizabeth’s bedroom early morning, fall on her, slap , tickle and generally grope her. It was a clear case of child abuse and I for one am sure it clouded her view of sex thereafter.

Thank you to Stan Perkins who contributed the following account of the “Royal Golden Bed”, (pictured). 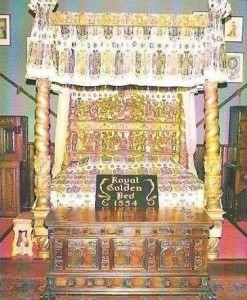 “I was somewhat reluctant to mention the “Royal Golden Bed”  after Jim’s address.  The bed  was organised by Philip of Spain for his son to meet with Queen Elizabeth 1st in 1554 and to seal the union of Spain and England at that time.  From hearsay he wasn’t at all impressed with Elizabeth who more than likely saw through the desire of Spain to have a direct connection with royalty of England at that time,  or did her wig slip and couldn’t contemplate a union with an older person.

The Royal Golden Bed was owned and presented to the General Public at “Winniston Park”  Ocean Beach Denmark by George and Winifred Harris,  together with a great amount of other offerings of  a similar nature.   It was well regarded as a unique collection throughout Australia and attracted people from all over the world.  Both George and “Winnie”  were great friends of mine and it was  regretted that the family elected not to continue with the Museum that was in the main connected to the Kings and Queens of that era.

The headboard of the bed was carved some 2  foot deep and almost 3 dimensional,  a magnificent presentation for all to see”.