Presented by: Jim and June Barns

Jim and June based their talk on the book, ‘Rites of Peace’ which covers the fall of Napoleon and the Congress of Vienna. Always popular speakers owing to their mix of historical facts and opportunities for including good humour, Jim and June commenced their talk by discussing the Battle of Waterloo that was fought on 18 June 1815, almost 200 years ago. Jim supplemented his talk with references to other documents. June read from an article by Ben Macintyre that highlighted the horror of the battle and the fact that the historical record produced its own rather heroic account, for propaganda purposes. 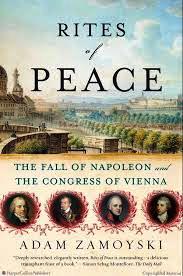 Napoleon’s rise to power was mainly brought about as a result of the Age of Enlightenment, the French Revolution in 1789 and the Instability caused by the revolution. Following the revolution France was at war with several enemies for many years and it was during this time that Napoleon rose through the military to positions of power. He later became the First Consul of France, a virtual dictator. He proved himself a good military leader and a good administrator as well. He later crowned himself ‘Emperor of the French’. June read a short section from the ‘Illustrated History of Modern Europe’ highlighting Napoleon’s Civil Code or Code Napoleon, which was part of many civic reforms he introduced.

In 1810 Napoleon controlled most of Europe but Britain remained an enemy. Years earlier he had established the Continental System aimed at denying the British trading access to ports in Europe.  When Russia chose to no longer comply Napoleon invaded Russia. The 1812 campaign did not end well and he and his army had to retreat during the height of winter and many casualties resulted. June read an extract from ‘Rites of Peace’ relating how Napoleon hurried back to Paris to re-establish his authority. Within a short time France was again at war with a number of European states. Following the Battle of Leipzig, Napoleon was banished to Elba. The Congress of Vienna commenced with the intention of re-establishing equilibrium and peace in Europe.

Napoleon escaped from Elba, made his way back to Paris, rallied his army and joined battle against an Anglo-allied army under the Duke of Wellington and a Prussian army under Gebhard von Blucher at Waterloo. The allies won the battle and Napoleon was banished to St Helena in the Atlantic where he died in 1821.

The Congress had taken 9 months to work out new administrative arrangements for Europe and Britain. The key players; Russia, Prussia, Britain and Austria all saw to their own needs and wants. The Congress was supposed to usher in long-term peace but that was not to be. During the reign of Queen Victoria 72 wars were fought!

Many thanks to Jim and June for an excellent talk.