Poems varied with rhymes of love such as John Betjeman’s ‘Joan Hunter Dunn’ and Robbie Burns’  ‘My love is like a red, red rose’, then Yates wishing…’Oh that I were young again and hold her in my arms’. 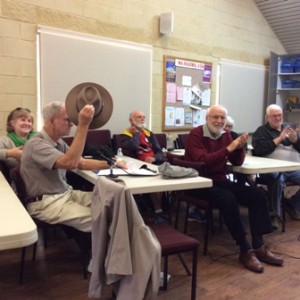 One of the notable poems was written in remembrance of ‘Bill’ who died after many years of working with asbestos.  His Akubra hat (pictured) was worn whilst the bush ballad was read and members were moved to hear of his varied life.

There followed an invitation to ‘Lift up mine eyes….to the hills…’ which allowed a quiet moment of reflection.    Readings from the Jesuit priest, Joe Gerard Manley Hopkins challenged us to think deeply and endeavour to understand about the evil in a perfect God.  There were humorous poems about computers swallowing grandma , internet dating to find a perfect cat, and 84 year olds tackling 50 Shades of Grey, with rope and whip.

An intriguing look at ‘The History of Poetry’ had us all laughing.   Bush ballads entertained us with the predicaments of Daisy – O’Reilly’s milking cow, who got stuck in Stinky Creek.  Another bush ballad concerned old age and related a day in the life of a widower on ‘An Acre of Grass’, by W B Yates.  Les Murray was featured, having composed 32 volumes of outback and other poems and had been awarded as a ‘Living Treasure’.  Phrases such as ‘Christmas paddocks, aching in the heat’ and scampering ‘on little moonlit claws’ entranced us with the use of language.  The vivid descriptions of ‘The Burning Truck’ completed the picture.

Nature wasn’t forgotten with Edgar Guest’s ‘Joy of a Dog’, Robert Burns ‘To a Mouse’ and ‘To a Daisy’ then Robert Frost’s ‘Stopping by Woods on a Snowy Evening’ and ‘The Road not Taken’.  Members were shown Henry Lawson poem collections illustrated by Pro Hart, plus a small anthology of Banjo Paterson.   Lastly we were delighted by Henry Parkes as ‘king’ coming in to Sydney by Mary Gilmore.

Altogether an afternoon to set members thinking and looking forward to the next session.