On April 29 a party of 20 U3A members, led by Dr Jim Leavesley, visited the WA Medical Museum in Subiaco. Following the train journey from Mandurah we refreshed ourselves at the Subiaco Hotel (coffee, of course) and then walked the kilometre to the museum to see their display of old medical equipment. It was explained that the building was constructed in 1896 to be used as an ‘Industrial School’, a euphemism for a delinquent  juveniles’ reformatory; in 1916 it was transmogrified  into the original King Edward Memorial Hospital and then the museum in 1986. 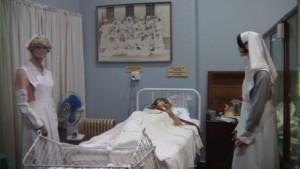 Inside,  the party was split into two and were shown round by the volunteers on duty. Among the fascinating exhibits were seen the fully equipped treatment half of an old RFDS aircraft, a mock up operation theatre, a GP’s surgery from the 1930s, a fully equipped Xray room from the same era, a working iron lung from the 1940s and a papier-mâché female torso from circa 1850 used to teach anatomy to nurses. The commentaries were excellent and the amazing exhibits greatly admired.

Members split up and went for lunch in nearby Rokeby Road and all felt they had had a splendid day out.

Please go to the Social Events page to see more photos of the outing. Photos courtesy of Christine Norman.