On the last Thursday in April, our group discussed a book of their own choice, resulting in a wide range of topics and even centuries, one being Caesar’s Women, which gave us all recollections of the film “I Claudius”.  Other selections were of families with behavioural problems such as We Need to Talk about Kevin, or of well-known authors such as Elizabeth Jolley’s Mr. Scobie’s Riddle, and its black humour and social commentary.  Tom Keneally’s Shane and the Captives, about the break-out at Cowra during the Second World War but also relating to a young wife falling in love with an Italian worker – a lighter side of the prisoner of war camps in Australia. 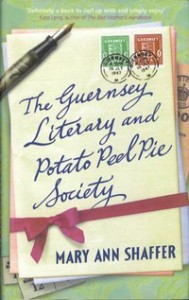 Somerset Maugham’s The Verger, giving the reader observations on social mores of the day,  dramatic irony and information on the extended empire.

Other choices of short stories were The Prophet by Kahlil Gibran, and Guy de Maupassant who in 1853 wrote about two young soldiers meeting and discussing what reminded them of home, which unfortunately ends with one of them committing suicide.  Norfolk Island by Robert Hughes was recommended as a good read.  As were Peter Fitzsimons’ books on Kokoda and Tobruk.

Other choices involved Wild by Cheryl Strayed, recommended by Oprah of TV fame, and Cheryl’s tale of rehabilitation from drugs after walking the “Pacific Crest Trail”. The ever popular The Guernsey Literary and Potato Peel Pie Society, about the occupation of the island by the Germans during the Second World War, by Mary Ann Shaffer, her first and only novel, unfinished but finally completed by her niece after her death, with many mourning her passing before she could write other informative and humorous books. Another member surprised us with her choice of The Golden Wattle Cook Book, creating much discussion on memories of school days as it was a must for every high school, and also on its wealth of information for young brides and families.

So ended a day of great recommendations and lively discussion.