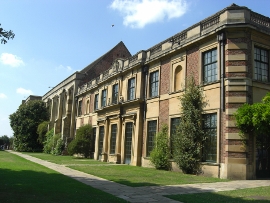 Henry was only 18 years old when he became King in 1509 and his reign lasted 38 years.  In the same year he acquired a long list of buildings inherited from his father.  The seven original buildings were called greater houses and they were The Palace of Westminster (now Houses of Parliament), Tower of London, Greenwich Palace, Windsor Castle (now home of Queen Elizabeth ll), Eltham Place, Richmond Palace, and Woodstock Palace.

Most were either lived in or visited by Henry himself either to see his daughters and son or to hunt deer, or to have jousting games with plenty of feasting.  He actually inherited 38 buildings, many medieval and it is inevitable that his six wives probably lived in these houses.

Henry loved to build houses, and it was one of his passions along with trying to have a son with one of his wives.

As well as the greater houses, Henry had lesser houses which most of us have never heard of.  Pam looked at twenty three of the Palaces, Houses and Castles that Henry Vlll inherited.  Although he built many during his reign and he acquired more by whatever means – fair or foul – we were able to appreciate the staggering fortune required to maintain and build these palaces and homes.

One of the  greater houses inherited by Henry Vlll was Eltham Palace which has the distinction of being mentioned in the Domesday Book as the property of Odo (Bishop of Bayeux, half-brother of William the Conqueror).  This palace is one of the few important medieval palaces still to survive to-day.

We viewed many photos of Henry’s residences which gave us a better understanding of the riches of royalty.

At the end of the presentation we watched a video narrated by one of the Beefeaters. Legend says that the kingdom and the Tower of London will fall if the six residential ravens ever leave the fortress.

Thank you Pam for a very interesting presentation and we appreciate the time and research into this project.