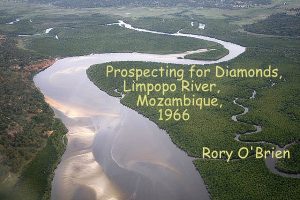 Rory commenced with an apology that the talk was a ‘personal’ experience, however, he had included geographical, historical, environmental and social aspects to relate it to, ‘People and Places’.

Mozambique is a former Portuguese ‘Province’ on the east coast of southern Africa. The coast was previously known as the ‘Fever Coast’ owing to the prevalence of mosquitoes and malaria as well as other ‘hazards’. The Mozambique Liberation Front (FRELIMO) fought a ten year war for independence from 1964 to 1974.

In 1966, the speaker worked for a diamond exploration company along the Limpopo, Nuanetzi and Shingwetzi rivers. He described some of the hazards that he encountered; ironically the smaller creatures were the more deadly. Adjusting to local conditions was a challenge; having to learn a mutual language, Funagalo, interacting with fauna, learning basic lessons from the Shangaan people, getting lost in the bush, suffering loneliness that led to ‘dreaming’, suffering malaria and sleeping in the open with lions in the vicinity.

The area was virtually cut-off during various wars, however, it was great to see that by the early 2000s a Transfrontier National Park had been created to protect the fauna and environment from human predation. 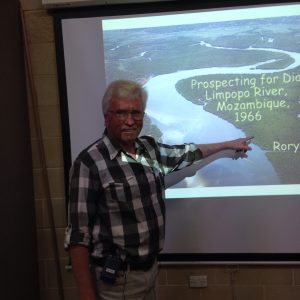