A full house of members and three guests enjoyed diving into the past with Joan and Sheila. They presented 4 cities from the trade routes of antiquity in the Middle East and showed how wealth accumulated and conflicts and sieges arose about 3,000 years ago…

Joan presented a comprehensive picture of the oasis city of Palmyra with its historic ruins, dating from 1,000 BCE.   She detailed daily life and trade, with the peace and prosperity achieved all those long years ago. She went on to tell us about Queen Zenobia, whom Gibbon, in his ‘Rise and Fall of the Roman Empire’ described as “a worthy princess” indicating her firm but fair rule.  Members then relived the horror of September 2015, when ISIS blew up the Triumphal Arch, built by Roman Emperor Severus. Other priceless ruins were also damaged and happily digital and 3D technology are now endeavouring to re-create those ruined buildings for posterity.

Sheila then took us through Petra in Jordan – the ‘Rose red city, half as old as time’. Photos showing the enormity and majesty of tombs, theatres and colonnades entranced members, with the narrow ‘siq’ a virtual crack in the bedrock. This is over a kilometre in length to allow tourists to access the old Nabataean city with its dwelling caves and ingenious water conservation methods. Members realised what a lot we have to learn today from these ancient engineers and Aquarius teams, who built conservation cisterns and flood mitigation barriers, more than 3,000 years ago. 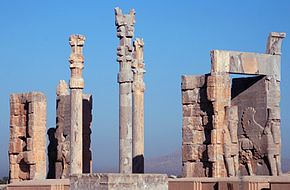 Gate of All Nations, Persepolis

Persepolis in modern day Iran, ancient Persia, was next. We explored palaces, stone carvings and great halls containing 100 pillars to support the roof. The wealth of Persepolis (ancient Parsa) was legendary and we are indeed fortunate that archaeologists have found 30,000 stone tablets detailing monetary transactions. Thus we know how systems worked and how public and private monies were spent.

The last city was one of the oldest, still inhabited cites, dating from 7,000 years ago, Jerusalem. Though it has been razed to ground level on two occasions and besieged many times, it thrives today despite the numerous conflicts of the past. The city now houses over a million people with Jews out numbering Muslims 2 to 1 and containing also a minority of Christians and Armenians.

Many members congratulated Joan on her excellent performance and we look forward to many more from her. 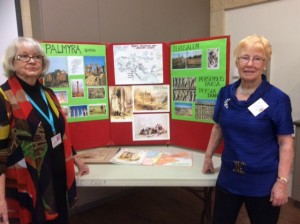