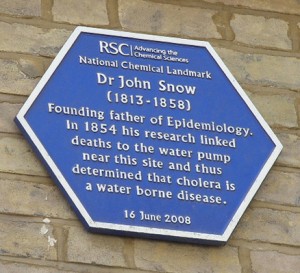 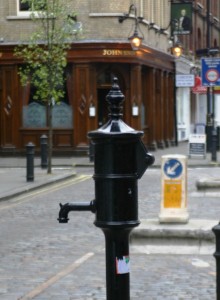 The John Snow pub, and replica pump with no handle

Jim’s first subject was John Snow (1813-1858). He changed the course of history and saved thousands from death in cholera epidemics. John was a medical apprentice who realised that cholera was caused by contaminated water. London’s water came straight from the Thames through cracked pipes and no filtration. He persuaded councils to remove the handles from street water pipes, fit new pipes and the result was the elimination of cholera. There is no memorial to John, only a pub called after him and a replica pump with no handle.

Before the work of Florence Nightingale, nursing was provided by the family or dirty, uneducated women. Later, monks and nuns tended the sick – they changed the sheets when patients arrived and left, often having 2 people to a bed. Treatment improved gradually but nurses had no formal training and were poorly paid. In 1856, Florence Nightingale raised money to establish a school for nurses where they continued the work she had started during the Crimean War. She had taken to her bed, but was visited by great people who appreciated how she had brought order out of chaos.

English Sweating Sickness appeared out of the blue and disappeared 60 years later, never to appear again. Thousands died, many in the streets, suffering from chest pains, rapid breathing, rampant infection and sweating. It had been brought to England by Henry the 7th’s followers and in 1502, Henry the 8th’s brother died of the disease and changed the course of history.

Marie Antoinette (1755-1793) married King Louise of France who was ugly and fat. He loved hunting, slept every night and did not consummate the marriage. Marie’s brother intervened and persuaded the King to have an operation resulting in the royal couple going to bed every afternoon and producing 4 children, only one of whom survived. Sadly, the family came to a sad end on the guillotine.

Marie Stopes had no medical training but wrote the first sex manual called “Married Love” which was reprinted 6 times in 6 months. The Catholic Church took her to court but she then wrote ” Wise Parenthood”. She did not follow her own instructions as she was married twice and treated her only son strangely by not allowing him to read till he was older and making him wear a dress to protect his genitals. She opened the first contraception clinics. 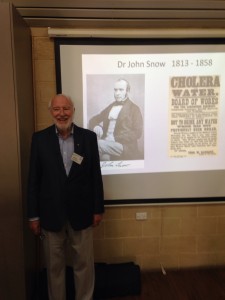