Upon entering the room, we were greeted by the whiteboard covered with words, no particular order, and the immediate reaction was to wipe it clean thinking it was from a previous lecture.

Margaret opened the class by welcoming us to the class.  Margaret read some snippets from a book by Bill Bryson – titled “Shakespeare”; this was a surprise, knowing this author mainly for travel tales.  Margaret also presented a book which is for school children in an attempt for them to understand Shakespeare’s Romeo and Juliet.  Margaret also brought a tea caddy which she has owned for some time with the entire outside filled with memorabilia.

SOME FACTS FROM HIS LIFE
He attended Kings College, a most prestigious school.
He was born and he died on the same day in April 400 years ago.

Due to an unwanted pregnancy he married Anne Hathaway 8 years older when he was eighteen.  The couple had altogether one boy, on his return a girl, then twins. At this time it is recorded that he was missing for 7 years and there is all sorts of speculation as to where he was.  A monastery, a previous lady friend, who knows.

David Smeeton had some background music from a CD filled with music of the days of Shakespeare.  He then went on to tell us that Shakespeare wrote 38 plays, 154 sonnets and other poems, 17,677 words including 1700 new words.  Language was going through change at this time.  This is where the mystery of the white board was revealed, the everyday words we use now all have origin with Shakespeare, we learned that “Knock Knock whose there?” was from Macbeth. “Neither a Borrower or a lender be” – Hamlet.  He also was the instigator of some very popular insults still used – “loathsome as a toad”, “lily-livered coward”. There were so many more.

It was then the turn of the audience and we had speeches, Elizabeth 1 as the Armada was sailing up the channel, Portia from Merchant of Venice.  Several sonnets. A modern twist to Sonnet 18 sung by Paul Kelly. Part of the Passionate Pilgrim.

We did have a slight switch away by Poems from Michael Leunig, the cartoonist; we were all surprised at this.  Also Hep went to Anzac Day with Ataturk’s speech.

It was a stimulating day, amazement at the incredible range of Shakespeare’s brilliance.  It is no wonder he is celebrated still and I am sure into the future.  I am sure he would be pleased with our effort to remember his wonderful words. 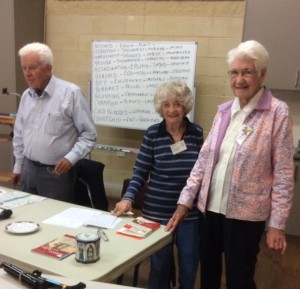 David Smeeton, Margaret Garside and Ida Kramer and the whiteboard