The ancient Greeks called the land to the east of the Aegean Sea Anatolia, ‘where the sun rises’. It is now part of Turkey. Sheila presented three cities; Catalhoyuk, Hattusas and Ephesus.

Catalhoyuk is the oldest of the three dating back to 6,800 bce. This city was noteworthy for its lack of streets. The people entered their houses via ladders and openings in the roof. Internally the houses used the roof holes as chimneys for their fireplaces. Another benefit of such houses is that they gave the inhabitants some respite from the hot desert winds.

Hattusas was the capital of the Hittite empire. It is noteworthy for the first known Defence Treaty with Egypt. Hattusas also had underground cities for sheltering Christians, at a later stage, when the Romans were persecuting Christians.

Ephesus dating from 300 bce was a Greco-Roman city. It is known for its Celsius Library, palatial villas with mosaic flooring, a ‘theatre’ that could seat 40,000 people and the Temple of Artemis, one of the wonders of the ancient world.

Rory gave a talk on Troy, Aphrodisias and Hieropolis. Troy is notable for the Greco-Trojan War described by Homer in the Iliad. The war, to retrieve Helen of Sparta from Paris, a prince of Troy, took ten years, the Trojans eventually being tricked with the wooden horse. Rory also related how the archaeological site was investigated by Heinrich Schliemann and how the treasure he found became scattered around the world.

Aphrodisias, dedicated to the Goddess of Love, Aphrodite, is very well preserved, being off the beaten track. The city was noted for its fine marble carvings and almost intact hippodrome, able to seat 30,000 people.

Hieropolis, named after Hiera is noted for its hot springs with healing qualities that have existed for thousands of years, and the hot springs are still enjoyed by locals and travellers today. In addition, the white travertine pools (referred to as ‘cotton castles’) form a spectacular geological feature enjoyed by all. 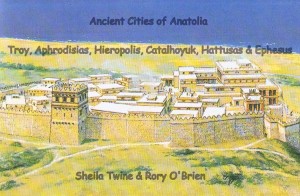