Carol’s presentation opened with a description of the Archibald Prize. Love it or hate it, the Archibald Prize is where we brandish our opinions and pick favourites and do not mind telling the judges they are wrong; and for a brief moment, painters are simultaneously as feted as celebrities and as divisive as politicians.

As Ben Quilty quoted – “The fact is, sadly, you need the community to be able to buy your work.”

Carol showed 47 slides of the finalists in the 2015 Archibald Prize and to put everybody out of their misery, she announced the winner, Nigel Milsom’s subject of Barrister Charles Waterstreet.

Milsom has known Charles Waterstreet indirectly since birth and he lived around the corner from the Waterstreet Hotel, owned and managed by his parents in Albury.  His relationship with Charlie took on more significance a few years ago when he represented Milsom in the pursuit of justice, stood up to what seemed an unfair, impenetrable brick wall.  “He put his head on the chopping black and restored my faith in the legal system.

Charlie is a very complex person.  He is not just a law man.  He’s a writer, a social environmentalist and is involved in film, photography and theatre.  My portrait is an attempt to depict him – a giant; part man, part-mythical creature with hands that appear other-worldly, as though the anatomy of his hands has been designed to grasp unnatural disaster, naturally.”

Carol also showed the finalists from the last decade and in conclusion, since 1935 there have been two extra awards to the Archibald Prize event.  In 1991, the packing room prize was established.  The staff who receive the portraits and put them in the gallery, vote for their choice of winner.  Although the prize is said to be awarded by the staff, the Gallery’s head storeman – as of 2001, Steve Peters – holds 51% of the vote.  The other award is the People’s Choice award in which votes from the viewing public are collected to find a winner.  This award also comes with a prize of $2500.00.

To date, there has never been a matching Archibald Prize winner and a packing room prize chosen in the same year. 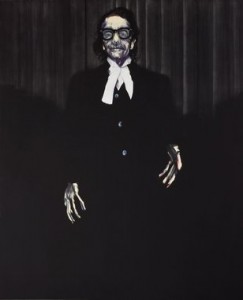