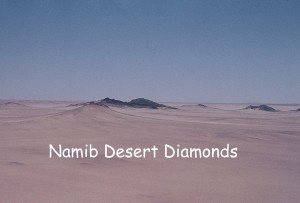 Aerial photo of Namid Desert north east of Oranjemund about 1968.

The talk commenced with the British Government, in 1785, considering the option of sending convicts to Das Voltas Bay on the African coast. The option was rejected as the environment was too ‘sterile and arid’ for settlement. That territory is now named Namibia. The country has a low population density, one of the driest deserts in the world and is rich in minerals. Since independence in 1990 it has been politically, economically and socially stable. The talk covered the turbulent history; time as a German Colony, the discovery of diamonds near Kolmanskop (close to Lüderitz, the original Das Voltas Bay) and the First World War.

The talk then covered the origin of the Atlantic coastal diamonds, the formation of the Consolidated Diamond Mines under Sir Ernest Oppenheimer and the commencement of the town of Oranjemund near the Mouth of the Orange River. Details of the diamonds and how they are mined were illustrated by means of photographs. The South West African Peoples Organisation commenced a war of independence supported by the USSR and allied countries in 1964. They achieved independence in 1994. The mining company was renamed Namdeb and is now administered from the Namibian capital Windhoek. Most of the current directors are Namibians with some links to the original de Beers Mining Company in South Africa.

In recent years the wreck of a Portuguese ship was discovered in the mining area. National Geographic Magazine described the wreck as follows; ‘Five centuries ago a ship loaded with gold wrecked off a beach laden with diamonds’. 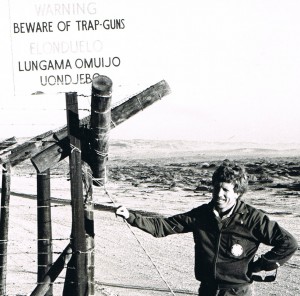