Dr Jim Leavesley presented his medical history topics. His first subject was William of Ockham who was born in 1285. William entered the Franciscan order and studied at Oxford but left without a degree. He expressed controversial views on contemporary theology and, as a result, was excommunicated by the Pope. He could not leave well alone and continued to write scathingly about ecclesiastical matters. He propounded his famous ” Razor” which stated ” commonest things are commonest” and other enigmatic statements. William died of the plague during the Black Death epidemic in 1348.

This Great Pestilence had swept through Europe causing millions of deaths, labour shortages, untilled fields and changes of relationships between master and servant. There was no curative treatment and starvation followed. William of Ockham was remembered as an influential philosopher in spite of his irascible nature and many streets and restaurants in Munich were named after him.

Jim’s next subject was James Graham who had crackpot ideas about sex and the use of electricity to improve health and sexual success. His Celestial Bed was used by the famous and especially by couples deserving children.

Next came Dr Samuel Johnson who published his dictionary in 1755. He had a magnificent brain, great diction and use of the English language but was plagued with illnesses all his life. He had double vision, his head tilted to one side, deafness, poor sight in one eye and suffered from gout. His mood swings and melancholy had been inherited from his father. A magnificent mind trapped in an unhealthy body.

Elizabeth Barrett Browning also suffered from ill health. She wrote poetry at the age of 6 and was talented, but spent many years as an invalid in a darkened room. On recovery, she slipped away from a controlling father and married Robert Browning who took her to Italy. This improved her health and she bore him a son. Sadly, she was diagnosed with tuberculosis and died in Robert’s arms. 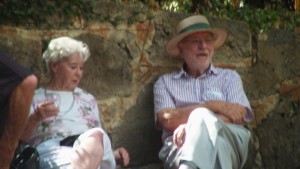